PEC officials have played down the prospect of deeper crude oil production cuts. Demand may be picking up and US shale producers are finally feeling the pinch. However, tepid prices and the awkward timing of the giant Aramco IPO will make a strong case for the group to take more action.

Oil continuing to trade around $62/b is a problem OPEC has failed to resolve. The group’s key producers from the Middle East require higher prices to sustain their petrodollar economies. Saudi Arabia requires prices above $80/b to balance its budget and faces its seventh straight year of total government spending outstripping revenues in 2020 unless it can engineer a rebound in the value of its main export.

Saudi Arabia’s plan to list shares in its state-owned oil producer Aramco in an effort to raise up to $100 billion from investors poses another problem for OPEC and its allies. The group’s final meeting of the year in Vienna is scheduled to take place on December 5, a day after the books open on the Aramco IPO. OPEC cutting production and boosting oil prices could help to deliver a final valuation closer to the $2 trillion desired by the kingdom’s leadership.

“In light of the announced plan for Aramco IPO on November 3, S&P Global Platts Analytics sees Saudi Arabia exercising much restraint in supplying its customers, allocating volumes well below nominations, which means Saudi Arabia’s over-compliance of the existing OPEC+ production agreement will continue,” said Chris Midgley, global director at S&P Global Platts Analytics. “Moreover, the odds of a coordinated cut would increase if markets do not strengthen over the next few weeks till the OPEC/OPEC+ meeting.”

Saudi Arabia output recovers
Saudi Arabia pumps about one third of OPEC’s oil and has overwhelming influence over decisions made by the group of 15 producers. The latest S&P Global Platts survey of OPEC production published on Friday showed the kingdom pumped 9.8 million barrels per day last month, which helped the cartel rebound from its lowest output levels since the global financial crisis of 2008. 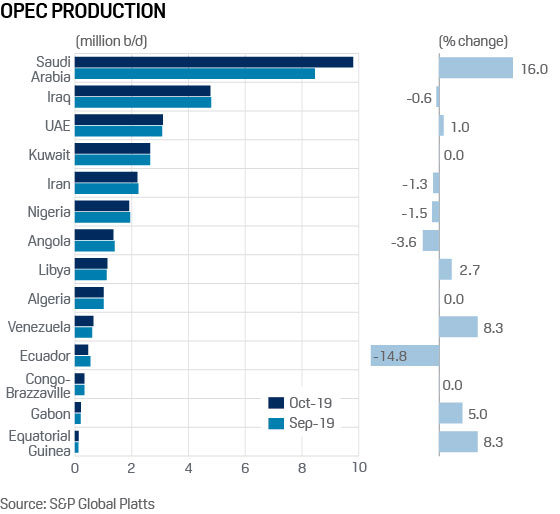 Meanwhile, senior OPEC officials are banking on stronger global demand boosting prices and removing the need for any discussions over deeper cuts to gain momentum.

“Based on the numbers and discussions going on at a technical level, 2020 looks like it has upside potential that will also defy some of the gloomy predictions we have seen during the course of the year,” OPEC Secretary General Mohammad Barkindo told reporters at a press briefing in Vienna this week, after the group had released its World Oil Outlook report.

Signs of this upside have already started to emerge in Asia. China’s crude oil imports in October surged 17% year on year to almost 10.8 million b/d, according to preliminary official data. The prospect of an easing in the trade dispute between Beijing and US President Donald Trump’s administration will also support oil prices.

Uncertainty over the continued growth of US shale production will also help OPEC. The closely watched US rig count has now fallen to its lowest level since March 2017. Chief executives from oil producers in recent earnings calls in the US focused mainly on cutting spending and paying down debt instead of boosting investment to drill for more oil in America.

OPEC members – which still pump about a third of the world’s oil – never like to cut production. Pumping less crude means they lose market share at a time when their economies can’t afford the lost revenue. Market fundamentals mean they probably don’t have to.