Irving Resources, the beneficiary of strategic investments from Newmont and Sumitomo, has been acquiring and exploring projects in Japan.

While Japan doesn’t automatically pop to the top of the list of gold mining hotbeds, it has a long and storied history with mining, dating as far back as the 700s, and since 1601 more than 20 million ounces of gold have been produced in the country.

Irving Resources Inc. (IRV:CSE; IRVRF:OTCMKTS), a spin out from Gold Canyon Resources, has been acquiring projects through its Japanese subsidiary.

The company is on the radar screen of majors. Newmont Corp. holds a 9% stake in the company, and at the end of June Irving closed a non-brokered private placement with Sumitomo Corp. of US$2.5 million. Sumitomo “has a long history of working with Newmont to finance and develop mines in different parts of the world,” Irving’s CEO Akiko Levinson said.

Irving’s first project is Omu, located on the northern island of Hokkaido. The area had some historical mining nearly 100 years ago, when a small amount of material mined there was used as smelter flux. In 2016, Levinson, along with Irving’s technical advisor, Dr. Quinton Hennigh, met with the prospector who owned the Omu mining lease. “When we arrived, he had a sack full of samples, and there was considerable gold in the samples,” Hennigh told Streetwise Reports.

Levinson and Hennigh visited the site and saw the trenches the prospector had dug to expose the vein. “We actually got down and saw the vein in place, and we were able to confirm that this was a very exciting vein deposit sticking out of the ground,” Hennigh said.

Levinson said she spoke with the prospector, and he told her that his father had tried to option the property to a Japanese mining company several decades ago for $1.2 million. “The company paid $800,000 and then decided not to go ahead with the project; the prospector told me that we could have the property if we paid the remaining $400,000. This has to be a unique solution,” Levinson said.

The company continued staking property in the area and now holds around 170 square kilometers in Omu. “We have all the ground around the mining lease, we have four high-quality targets across the property, and we’re making discoveries on all of them,” Hennigh explained. “This has turned into an absolutely fantastic project for us; it gives us more or less a district-scale epithermal play, and we’re seeing very high grades in our drilling so far. It’s on the right trajectory.” 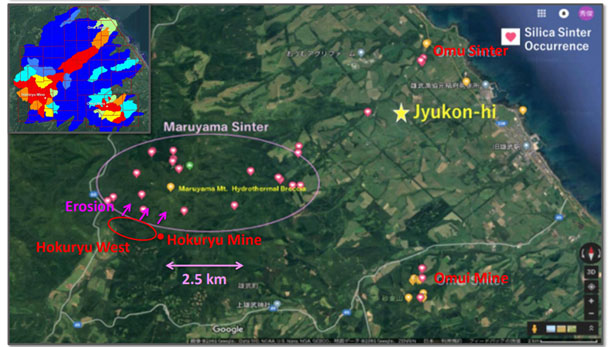 Irving first began drilling in March 2019 on the Omu sinter, a hot spring system, and the company announced in May of that year that it encountered high-grade gold and silver, including a 0.32meter interval assaying 118.5 g/t gold and 1,410 g/t silver, or 135.09 g/t gold equivalent. “Seven out of eight drill holes hit mineralized veins,” Hennigh said.

This year the company has drilled several holes at the Omu sinter, and is also drilling at the Omui mine, the site of the original mine lease. The company released information on the first three holes from Omui in June, when it reported that the first hole “intersected a ‘Honpi’ type high grade epithermal vein grading 12.59 g/t Au and 12.22 g/t Ag (12.73 g/t Au eq) over 2.72 m beginning 60.0 m down hole.”

Hennigh said that in the June release on the project, “we talked about a very exciting vein intercept that we have in hole number three. Those samples are in the laboratory right now, and we are anticipating getting the results any day now.”

“We anticipate drilling at Omui for the next couple of months, into the fall,” Hennigh said. “Then as the weather starts to change, we’ll probably go back down to the Omu sinter and carry on drilling down there. We also have other targets, for example, Hokuryu, which is further up in the mountains off to the west. It’s an existing historical mine that operated for a few years right before World War Two, when it was shut down. It has lots of exploration potential; we’ve done a lot of geophysical work, and have very good targets lined up there. We probably won’t be able to drill there until 2021, but it is a very high priority target for us.”

The company is looking at an alternative mining model for Omu. “The idea is not to mine and process the ore in the conventional way; we’re planning on mining and directly shipping the material to smelters and use it as smelter flux. The important thing about that is you don’t have to put up the capital to build a mill. You don’t have to have big waste piles and tailings disposal. You can have a very small footprint and you get very good recoveries of gold and silver in the smelter. So, the business model here is to find deposits that are suitable for smelter ore,” Hennigh explained.

“The smelters pay very handsomely for the gold and silver in the stone. They effectively pay for 90+% of the gold and silver. That’s fantastic because that’s like getting 90+% recovery out of a conventional mill,” Hennigh said. “If we get this going, it will be the second largest gold mine in Japan.”

In addition, Irving is expanding its position in Japan at the opposite end of the country with the recent nonbinding term sheet it signed with Shimadzu Ltd. to acquire the Yamagano mining licence, the “site of extensive historical high-grade gold vein mining in southern Kyushu, approximately 11 km Southwest of the large, high-grade Hishikari gold mine.” 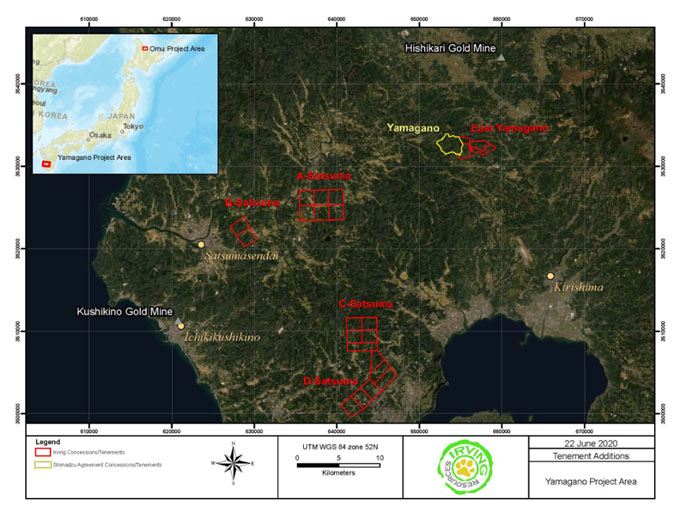 “You could call the Yamagano project the crown jewel of exploration in Japan. There was historical mining here, but it has never seen modern exploration,” Hennigh explained. “The project geologically is very similar to the Hishikari Gold Mine, which is only a few kilometres away. We have, in my view, the highest quality exploration target in Kyushu. And by cutting the deal with the Shimadzu family and then seeking the adjacent tenements, we cover about 95% of the target.”

Irving noted that with the addition of mineral prospecting licences immediately east of the Yamagano mining right, “we will, upon execution of the option agreement with Shimadzu, control virtually the entire gravity anomaly that defines the area of highest prospectively within the district. In addition, we have secured tenure over four similarly prospective yet unexplored gravity highs, the Satsuma blocks, Southwest of Yamagano. Irving is now similarly well positioned with a high-quality epithermal gold project in Kyushu as it is in Hokkaido.”

This arrangement has attracted the attention of industry observers. In Gold, Energy & Tech Stocks, Jay Taylor wrote on June 26, “Irving Resources Inc. has signed a nonbinding term sheet with Shimadzu Ltd. to acquire the 5.25 sq km Yamagano mining licence, site of extensive historic high-grade gold vein mining in southern Kyushu, approximately 11 km Southwest of the large, high-grade Hishikari gold mine. . .already Irving is one of my personal favorites, but this potential acquisition ramps up my excitement for this story into the future.”

Bob Moriarty noted in 321gold on July 1, the Shimadzu family “agreeing to talk about terms on advancing Yamagano is nothing short of incredible and pretty much ignored by the market. . .on June 26th after the market closed, Irving dropped news of another stupendous coup, that of inviting Sumitomo in as a strategic investor for $2.5 million USD. . . What it represents is a three-way deal between Sumitomo, Newmont and Irving. That’s not unlike an eight-year-old prodigy being invited to the World Cup of Chess.”

Tanzania: Puma Energy partners with three firms on life insurance for customers of its fuel

Zambia: 50kgs of Gold Produced from Kasenseli gold mine.

Metso Outotec issued its first bond of EUR 300 million with...